The Privilege of Self Care That Nobody Speaks To

Who deserves the privilege of self care? If you ask the masses it is surely not the  underserved sister with 5 children from multiple fathers who is raising them with no support and living off of social security and food stamps.

The NY Times published an article about 33 year old Melissa Ferrer who is the single mother of 5 boys, 3 of which have autism. She jumped from shelter to shelter with her children and now has an apartment that she is scared to get settled in because life simply hasn’t been that kind to her.She suffers from panic attacks as well as her knees and legs aching. The NYT quotes Melissa saying  “I might look 33, but I’ll tell you one thing, inside my body, I don’t feel 33,” said Ms. Ferrer. “I feel like I’m 70 years old.”

Who needs self-care more than the marginalized and oppressed, those of us who live amidst a system that says we don’t matter, nor do our children and are surrounded by systems and structures that don’t support our well-being. I count myself in that number even though I come from a place of privilege, like Melissa I have children who have different fathers who I am the sole caretaker of, I live in the Bronx and shit gets rough sometimes as a freelancer. That is where most of our similarities end, while my son suffers from a chronic illness and my daughter respiratory issues they have manageable treatment plans and good coverage and there are only 3 of us that I am responsible for. While money gets tight and shit gets cut off from time to time I know my kids will always have a roof over there head and food on there backs because I have people. I have a community of friends who have my back, while I don’t get much me time but I know for a fact that if I need someone one of my people have my back. There is comfort in that.

Michelle is responsible for six people and cannot work and has no community. Melissa speaks to the fact that she has a large family but no support. The family I am sure she sees from time to time notices the chunks of hair that she is missing and probably even tells her that she needs to take better care of herself, but how? How do you take care of yourself when you have 3 special needs children who you stay home with as well as 2 other children that need your time and support and you have limited resources and support. Seriously how long will she be able to take really good care of her children while her health and well being decline?

If you read the comments (which I did and you should never do) Mellissa doesn’t deserve spa days, yoga and meditation, getaways or even a day or two to herself because she didn’t make the same choices in her life that they did.

How do we kill a construct that doesn’t take care of the “least of these”? How do we support Melissa and the countless others like her in affording the privilege of putting themselves first. How do  we support sex workers, strippers, homeless, our trans sistren, poor single moms and others who are left to the wayside when the conversation of self-care comes up?  While this site has value as many have shared we need to broaden our reach and talk to the community and work to set up communities of care to support the masses, not just those with wifi and time to read about self-care.  On a side note in the New Year we will be hosting events to engage and support each other in self-care because the revolution is dependent on our health and well- being.

Social Justice Organizer Yashna Padamsee said it best, “It is our responsibility not as individuals, but as communities to create structures in which self-care changes to community care.” How do we create communities of care? Can you imagine the power we would have collectively once we figure that out?

Care Through the Holidays

Another Meaning to “Just Say No” 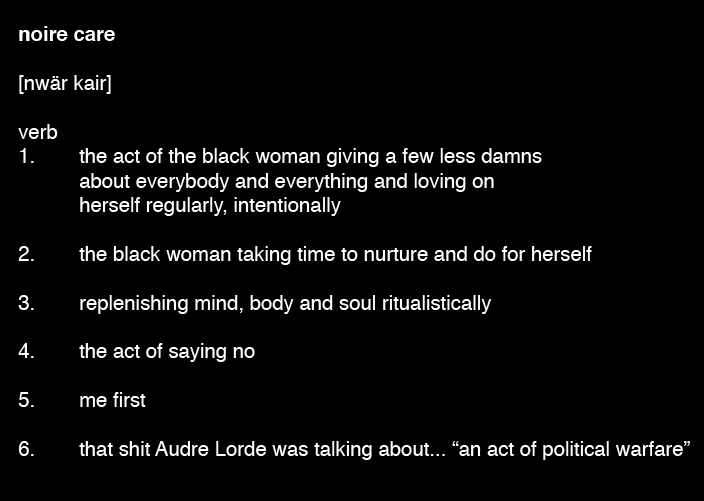 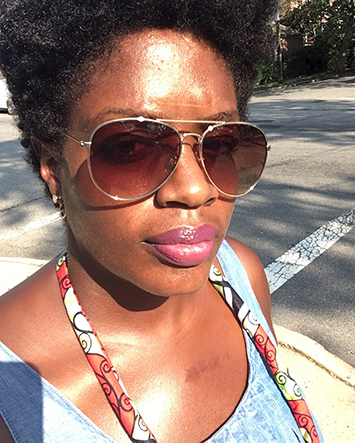 I wasn't always courageous enough to pencil out time for my spiritual and physical well being. I come from a culture of moms who wear the martyr badge at all costs, you take care of others and whatever if anything is left you use for you. I've since learned the benefits of making time to love on me and want to share what I've learned and learned from others. The platform was designed to support revolutionaries who have decided to give a few less damns so that that they can do a little something for themselves. Its full of inspiration for those who have yet to begin their self care journey and are trying to figure out what or how taking time for self looks as a women of color. NoireCare is giving you permission to say yes to you. Read more here